Posted on 11 June 2020 by Christian Beck Leap Dealing With

It’s being widely reported that Beck has sacked more than 600 of the people who had been working for his various companies, this when it’s probably been more difficult for them to find alternative employment since the great depression, perhaps it’s never been more difficult! But does he care?

One of them, who claims to have known Beck for more than 30 years, perhaps one of the very few lucky ones, has sent us this, which we’ve passed on to Beck – not that we expect he’ll respond in any way. 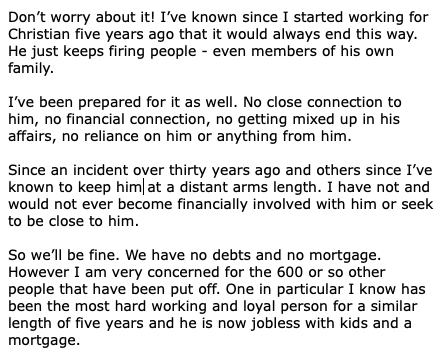 Perhaps sound advice to everyone.

Another of our readers claims that he did exactly the same during the Global Financial Crisis – that she was in tears over the plight of some of those she knew personally who had been hard working and loyal for years – but he didn’t care.

Presumably, he’s sacked 600 people to ensure that he has enough money for all his womanising, his buying of more and more real estate, his yacht racing and so on – it’s rumoured that he’s trying to buy another Sydney-to-Hobart yacht race winner to go with InfoTrack, the yacht which he’s raced in the last two Sydney-to-Hobarts at the cost of millions.