Posted on 20 May 2020 by Christian Beck Leap Dealing With

An extract from this article http://www.bpmcorp.com.au/documents/previewpdf/276. 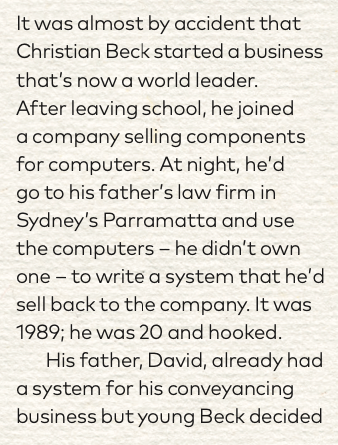 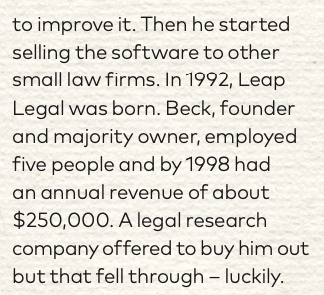 In typical Beck style a lot of the truth on these matters has been left out, or, anything that’s been said has been embellished, to put it mildly! His father has added the following:-

In Christian’s first two years out of school – 1987 and 1988 – after being very poor at school work, he’d even been made to repeat one of his early years, he had 6 jobs, one of which he got the sack from after 3 weeks! Naturally I was very concerned – he seemed a hopeless case! Despite having lived, since the age of 11, i.e. for more than 7 years, with an older brother, a bit over 13 months his senior, who was so into computers and who seemed destined for a great career in computers, (which is how it’s turned out,) Christian had never shown the slightest interest in them. But, as indicated above, working in his 6th job got him interested. So I started sending him to weekend conferences and other seminars, and, as is mentioned, he started working in my computers at night and seemed to be becoming more and more interested in them, – was this the light at the end of the tunnel? Could he also have a career in computers, like his brother? Eventually, I invited him to come and work in my office, which led to me setting him up with a mate, who was a computer expert, to work side-by-side with him, both on good wages, with no rent or other incidental expenses to pay, and computers and other incidentals provided. As is stated, this was in 1989. And then the lies start! He’s quoted elsewhere as saying that I asked him to come and work on improving the systems I had developed – which couldn’t be further from the truth. At the time he started working in my office, his only knowledge about computers and computing was bits and pieces he’d picked up in the weekend conferences and seminars I’d sent him to, and initially, for quite a while, he and his mate just worked for a grocery chain. (He’s also quoted elsewhere that he taught himself programming, which is also absolute rubbish rubbish – he was taught programming by his mate and his brother.) Eventually, of course, they did stop working for the grocery chain and started developing systems for legal practices, but the claims that “young Beck decided to improve” his father’s systems are further quite incredible lies. Of course, my systems were a starting point for him, but he never worked on my systems and I never used his – mainly because my systems utilised a database program called Filemaker, and, on the recommendation of his brother, his systems used a different database program called 4th Dimension. So for nearly 3 years, from early 1989 into 1992, when it’s mentioned that “Leap Legal was born,” they kept working away in my office – I even provided him with his first employee  – one of my legal secretaries, and continued paying her wages for some months. And the rest, as they say, is history. Of course, Christian deserves full credit for a lot of what’s happened since 1992 – but, as is noted, “It was almost by accident that Christian” started his business – with my help he stumbled into something in which he has thrived.

Of course, the main point of our publishing the above is to make more people more aware of what dealing with Beck is like – lie after lie, and misrepresentation after misrepresentation. And to beware! The fact that it’s claimed that, in the face of the virus problem, he’s recently sacked 600 employees, leaving 600 people to search for alternative employment in the worst possible work environment, Seems to just be more of the same.

In this respect, his father has added this.

In it’s early days, Christian was always saying that Leap was one third mine. But, of course, in hindsight, this was just typical Christian Beck – it was just to induce me to keep giving and giving and giving,  so he could keep using me and using me, because, in the end, he went against everything he’d ever said, and I ended up with nothing, in a share of any size or anything else? If I’d ended up with it being 2 or even 1% mine, I’d most likely be a multi-millionaire now. Instead, I’ve fallen on really hard times and have almost nothing.

A copy of this post has just, on 21 May 2020, been emailed to Beck for his comments, and if we receive any – not that we’re expecting any for a moment – they will be added to this post.