Posted on 30 May 2020 by Christian Beck Leap Dealing With 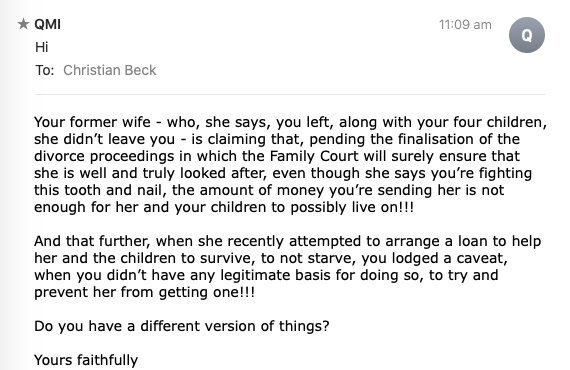 This is getting worse and worse!

His former wife has subsequently claimed that he put caveats on all their properties, whether they were in her name or his name or the joint names, virtually on the day he left, and whether he had a proper basis to do so or not – she’s a fully trained and experienced solicitor, so she should know what she’s talking about. And if this is true, it would appear that he may have been trying to ensure that she couldn’t organise any loans for the four kids and her to survive on while he fought tooth and nail, using the most aggressive lawyers he could find, to avoid the Family Court from ordering him to pay over any money, or at least delay it, from day one – when he was leaving her???

As we have said, he may have a different version of things, but it’s almost as though he believes in vindictiveness for it’s own sake???

What do our readers think?

We’ll let you know if we get a reply.